A House All Stilled 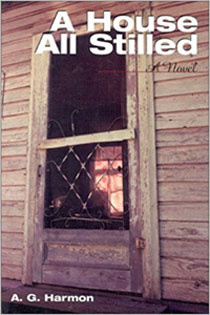 A House All Stilled: A Novel
(University of Tennessee Press)

House All Stilled: A Novel (University of Tennessee Press, 2002)

In a small town in Mississippi, a young boy is coming to maturity in spite of himself. Henry Tollet arrives home one day badly bloodied after being attacked without provocation near his school bus stop. He did not even know the boy who did it, a scraggly youth who vanished as mysteriously as he had appeared. Henry winces as his grandfather tends to the wound, but it is his father’s reaction that troubles him.

Cox Tollet received custody of his son after Henry’s mother divorced him, and he now tries to hold onto his father’s farm—without any help from the old man, who still holds the title but spends most of his time drinking. Henry, now twelve, has been an increasing source of concern and dismay for Cox. Called to task for not defending himself against his assailant, Henry is expected to seek out the stranger and take revenge.

Henry’s inner struggle over satisfying his father propels this haunting, sexually charged novel, which leads us through a tangle of strained relations and misdirected intentions. The mystery of the assailant’s identity and motives creates tension both in the house and with Henry’s headstrong mother and stirs up old heartaches and recriminations based on memories that may or may not be true.

A. G. Harmon's portrait of three generations pitted against one another depicts a family deadlock from shifting perspectives. Henry has known for a long time that he did not exactly suit his father; now Cox’s expectations have stoked a fresh anger in his heart. When not distracted by his son’s diffidence, Cox is faced with sorting through his own father’s lies. Old Man Tollet, meanwhile, rambles on about his wartime experiences or absently sings “sacred harp” songs from his youth.

Cox’s dissatisfactions with both his father and his son—and theirs with him—move the story to a gripping resolution, one in which Henry learns not only to fend for himself but to fend for his future. A House All Stilled brings readers face to face with three uncertain lives and shows that certainty belongs only to those who have the courage to claim it.